Kwetu Home of Peace: 37 boys reintegrated into their families

37 boys have been reintegrated into their families following two years of rehabilitation at Kwetu Home of Peace. 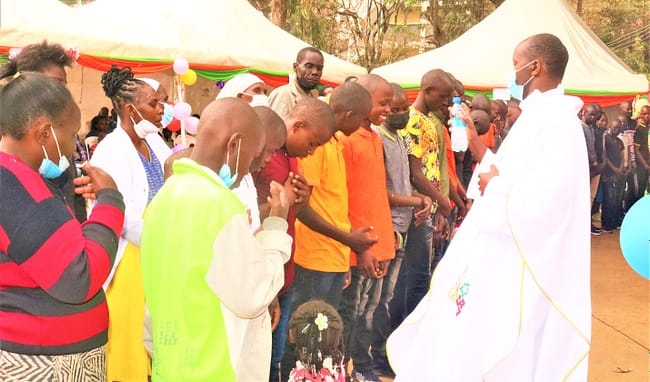 Fr. Erastus Chege from Don Bosco Boys, a rehabilitation centre for street boys, blesses the reintegrated boys at Kwetu Home of Peace during the reintegration ceremony on Oct. 9.

Kwetu Home of Peace reached a milestone of having 37 boys reintegrated back into their families after completing a two-year rehabilitation programme at a ceremony held at Kwetu Drop-in centre in Madaraka, Nairobi, on Oct. 9.

During the two-year rehabilitation

During the two years of rehabilitation, the boys undertook formal education in the neighboring public and private schools. The boys also went through a well-designed skills training and talent development programme that is important in expanding their skills outside classrooms. The boys stayed at Kwetu for only two years, but they will continue their education even after reintegration.

Mrs. Sarah Kihoro is the headmistress of Dramvale Primary School--one of the schools where the boys are enrolled to pursue their primary education while in rehabilitation at Kwetu home. She urged parents to always try to understand their children, particularly boys, who are neglected most of the time. 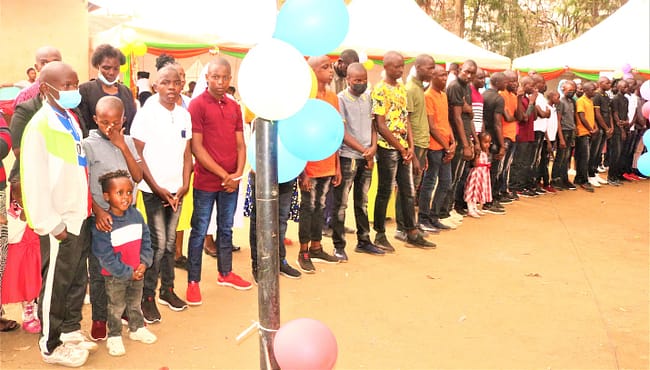 The 37 reintegrated boys line-up alongside their parents during a moment of prayer at the ceremony.

"The community should not use words such as "chokora" to refer to street boys, but rather use polite language that doesn't stigmatize children," said Kihoro. The expression Chokora belongs to the Kenyan street slang called "Sheng" (languages of the city's neighborhoods), and it's used to refer to street or homeless children.

She also emphasized the importance of educating children and said education sets up children for future success. "Education is the key to success. So let us help children succeed at school," said Kihoro.

Fr. Erastus Chege from Don Bosco Boys, a rehabilitation centre for street boys, led the mass during the reintegration ceremony. He thanked the attending parents for accepting their call to join Kwetu Home Peace for the reintegration ceremony. He urged parents not to discourage children and reiterated that encouragement and good parenting are critical to the success of our children.

Fr. Chege receives thanksgiving gifts during the mass offered by sisters at Kwetu Home of Peace.

Fr. Chege receives thanksgiving gifts during the mass offered by sisters at Kwetu Home of Peace.

"Let us be fathers and mothers, brothers and sisters to the children no one wants," said Chege. "These boys will continue to have a special place at Kwetu home," he added.

Encouragement during the Ceremony

Mary Wangui, the mother of Patrick (one of the reintegrated boys), thanked Kwetu for the excellent work and urged the boys not to revert to the old life on the streets. "As a parent, I will support my children so that they don't return to the streets," said Wangui.

Stella Ayuko, a representative from Lang'ata Children's Office-Nairobi County, reminded the boys that one of their duties is to be respectful and grateful for the good things they have received.

Mr. Frank Lawrence, a former board member of KHP, urged the boys not to forget the good things said during the ceremony.

"Remember to keep with you all the wise words said for life," said Lawrence. "Parents, remember your duties," he continued. "Try to understand your children and support their education," he added. "Let's not be the cause for their return to the street," said Lawrence.

A boy receives his certificate of completion accompanied by his mother (left) during the reintegration ceremony.

Brother Joseph James from Patrician Brothers-Ruai Community thanked the visitors, parents, and Kwetu fraternity for all the good work done. "It's not easy to bring up and take good care of the boys for two years," said James. James reminded the boys to be humble at all times and wished them well in their upcoming endeavors.

Tabitha Kiarie, and friends from PCEA Nairobi West Health Board, assured the boys of God's love and care. "Be different and yearn to make a difference and God will bless you," said Kiarie.

Tabitha Kiarie and friends donated personal protective equipment that included face masks and gloves to KHP after sharing a word of encouragement with the boys. The PPEs will help protect the KHP staff and the reintegrated boys against coronavirus.

Sr Delphine Mukwana of the Association of Sisterhoods of Kenya urged the parents to be welcoming and collaborate with sisters during the rehabilitation process.

Sr Gladys Nanjala, the coordinator of Ruai Main Centre, thanked the almighty God for his blessings and all he has done for the reintegrated boys.

"As I stand here as Shosho (grandma) to our boys, my heart is full of joy to see how our boys are transformed," said Nanjala, "I vividly remember the day we came to pick you from different street bases in town," she said.

"You were in different shapes; almost all of you were dirty, unkempt, and under the influence of drugs, but we as Kwetu saw the image of God in you, and that is why we invited you to come and share God's unconditional love with us," Nanjala continued.

"For me, I can say we are celebrating our common bond as descendants of our unique families," she added. "Please go, learn, love, value, and embrace your precious culture and have a sense of belonging in your families," Nanjala said.

Sr. Gladys Nanjala (Shosh) shares words of inspiration with the reintegrated boys during the ceremony.

Kwetu bridges the gap between children and families

Sr. Janerose Nyongesa, director of Kwetu Home of Peace, said that Kwetu has acted as a bridge to reunite the boys with their families. "As you know, the bridge carries all the weight, while the person crossing over is comfortable sometimes, not realizing its importance," said Nyongesa.

"I earnestly ask you not to take for granted how this bridge has molded you to be where you are," Nyongesa continued. "It is through God's grace that you received transformation," she added.

"We have done our part, and I ask parents not to let us down," Nyongesa pointed up. "Love your children and create time to be with them and listen to them," she reiterated.

On the left: Sr. Janerose Nyongesa, director of Kwetu Home of Peace, leads the boys and parents through a cake cutting moment during the ceremony.

The reintegrated boys were then issued commendation certificates to celebrate their successful completion of the rehabilitation programme at Kwetu. Finally, Sr Nyongesa gave certificates to 37 boys, with each one of them accompanied by their parents to receive the accolade, followed by the cake cutting moment that marked the end of the event.

Kwetu gifted parents with food items after the reintegration ceremony.

Join us in our mission to empower our boys through education

Join us in our mission to empower our boys through education